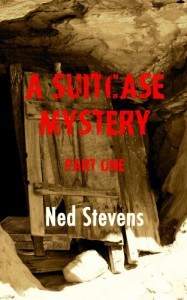 A Suitcase Mystery by Ned Stevens is a Cold War espionage thriller that rattles along at a good rate of knots. The story starts in Latvia as WWII is closing down. Russians invade and take over where the Germans left off in much the same style. Young Ben investigates the local coal mine now used to store gold and other precious items stolen by the new invaders. Although he is caught, he manages to wheedle his way out with a suitcase.
The reader is propelled to the early sixties when Blue Velvet by Bobby Vinton is released. Ben grows up and becomes a boxer. His poverty days have been left behind, but that suitcase comes back to haunt him. Secret agents want what is inside that case, something that looks harmless but is in fact a time bomb of information, and the clock has run its course.
Ben's family suffer greatly as a result of this much coveted item. Spies pop out of the woodwork and do what spies do best. Now the FBI get involved in this complicate case full of twists to satisfy all spy novel enthusiasts.
5 Stars and highly recommended.